A photograph that made me think 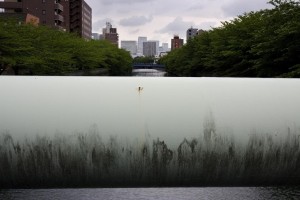 This photo was taken by Chris Steele-Perkins in Tokyo Japan 2008. I really like the way he has divided the photograph in to two. Personally I think that the bottom half resembles bad (death) and the top half good (happiness and prosperity). The way that the mud or oil has splattered up the pipe looks as though it is mimicking the silhouette of the buildings in the background. He uses lines of dominance to control the viewer’s perspective to be looking straight through to the buildings in the background where it looks peaceful and calm in juxtaposition to the dirty and angry looking pipe. The green trees add some colour and life to the photograph. Again the tree line draws the viewer’s eyes towards the back and center of the photograph. I really like the way that there is so much depth in this photograph ranging from a really close up view of the pipe, then going miles back into the distance to see the clouds and other urban features like the bridges and buildings in the background. There is not a shallow depth of field because the photographer has decided that he wants everything in the frame to be in focus and this allows the viewers to see everything that’s going on in the frame. This is a very clear photograph and doesn’t contain any distortion that if he used a shallow depth of field may have caused.

Louis Verrells
L1 Photography – University of the West of England