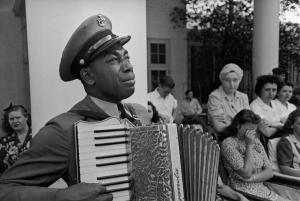 This image, of Navy CPO Graham Jackson, intrigued me with its unmissable emotion he is conveying, drawing the audience in to look deeper into the connotation of this impulsive composition. LIFE magazine photographer at the time, Ed Clark, was asked to attend Franklin D. Roosevelt’s funeral cortege in Warm Springs, Georgia, in 1945. Around 135 photographers arrived to get a shot of the caisson alongside Roosevelt’s casket, however, Clark heard the accordion playing Dvorak’s “Goin’ Home’ from behind and was the only photographer to take notice of the Navy CPO’s expression. Jackson was a personal friend of Roosevelt, even collaborating on the song “Goin’ Home” in the Little White House the day before the president unexpectedly died of a stroke. From this information alone, you can feel the heartbreak and feeling of mourning in this one image.

I love the way Clark has composed this image. It makes the audience question whether Jackson is looking up at something specific, and what he must be thinking at that point in time. Also, from Clark’s viewpoint, he focuses on Jackson, yet you can still make out the facial expressions of the figures in the background. Whilst some show grief-stricken body gestures, others look, slightly confused as to why the Navy CPO is so devastated. Perhaps suggesting they may not of known about Jackson and Roosevelt’s close bond. Clark uses a shallow depth of field to pinpoint Jackson as the main subject, and even though colour photography wasn’t that popular in the 40’s, I like the fact that the composition is in black and white as I feel that the contrast brings out the falling tear down the Navy CPO’s face and the sadness in his eyes.