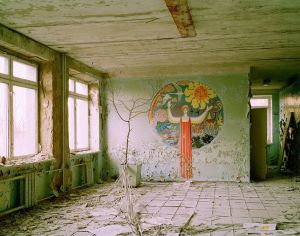 This picture shows an abandoned apartment in the town of Chernobyl which was left in devastation after a nuclear accident. The tree starting to grow in the middle made me think about how nature was taking over the decaying town and provides a sense of man vs nature, with nature being in the lead. It also made me think about the different aspects of contrast represented in the image. Firstly the peeling wall paper, smashed floors and decaying wood all show a state of ruin, however the religious image on the wall remains in perfect tact which made me feel an eerie sense of perhaps whether religion may play a part in such disasters. Also the contrast of bold colours from the painting compared to the the calm and mundane colours of the rest of the room seem to represent when the place was once lived in, it would of been cheerful and full of life but now has been left empty and desolate. The last contrast I noted was the lighting used in the image, to me it seems fairly bright which makes the room look light and airy as if it is a happy place, however the obvious truth is that is a completely abandoned place with a tragic past behind it.