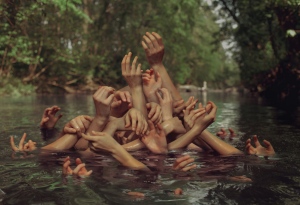 This image in particular caught my interest due to its ambiguous yet captivating nature. Known for his introspective and highly conceptual pieces in which you often question the narrative of the story he is trying to evoke. With no discernible central character or protagonist in this piece with no face in view, the image becomes more ambiguous. You are no longer able interpret a specific story line to the image, instead many, appealing to the masses. The central focus of the image is the formation of scrambling limbs clasping and reaching beyond the surface of the dark watery depths. Either in strength or struggle perhaps representing the broader human condition, in the face of mortality. In juxtaposition, the seemingly tranquil, natural environment, the lustful grappling of the flesh, representing a kind of purgatory for the photographer himself or the collective. For example, the two natural elements of earth, the forest and immersive state of the water, being the two planes of existence represented as natural states of life and death. To finalise, only some hands appear to be partially penetrating the surface of the water, those unable to cross through the thresholds or even reach the central formation in unity.