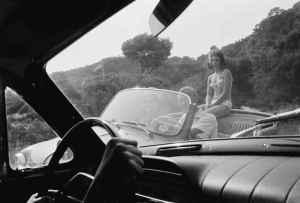 Initially I was interested in the angle that this photograph is taken at, looking across at a passing car from inside another almost like a still from a movie. The people in the car appear to be a family and the young girl in the back has a carelessness about her, which makes her look like a typical teenager, the way she is dressed, sat up on the back of the car and staring at the camera with a stubborn expression. You can just about make out that the woman in the front of the car, assumed to be her mother, is smiling widely almost in a way of keeping up appearances, to seem as though they are a happy family despite the father looking less enthusiastic. This image resonates to me family holidays, where you can almost always guarantee at least one argument during the trip, particularly at the teenage age where you begin to feel as though you have grown out of the things you used to do as a child. the young girl dressed ready for the beach, with a flower in her hair, yet her body is slumped as though she is bored and her expression moody, disappointed.