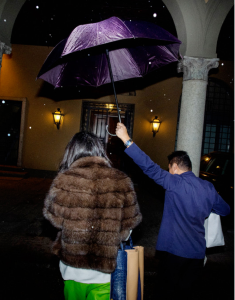 A photograph that made me think.docx

At first glance this photograph almost looks like a holiday snapshot, but it is not until you take a while longer to read it that it makes you realise it is far from an innocent shot. The photograph focuses on three adolescent girls, two of them twins. The two twins are almost a mirror image of each other, both standing with their hands across their bodies, suggesting self-consciousness, perhaps because their bodies are more exposed than usual in a swimming costume. They also remind me of the two twins photographed by Diane Arbus where one twin looks slightly more confident than the other. The girl on the right is a stark contrast to the twins; she does not look at the camera, stands more confidently and is dressed in a white costume which stands out against the grey background. Interestingly, the bottom of her costume has moved to reveal her pubic area, so what appears to be an innocent snapshot has become an intrusion of privacy, particularly as you look along the fence to see an older looking boy peering over at them, it has become a representation of how women’s bodies are sexualised even from a young age.

Please feel free to leave comments and start a dialogue about the articles.